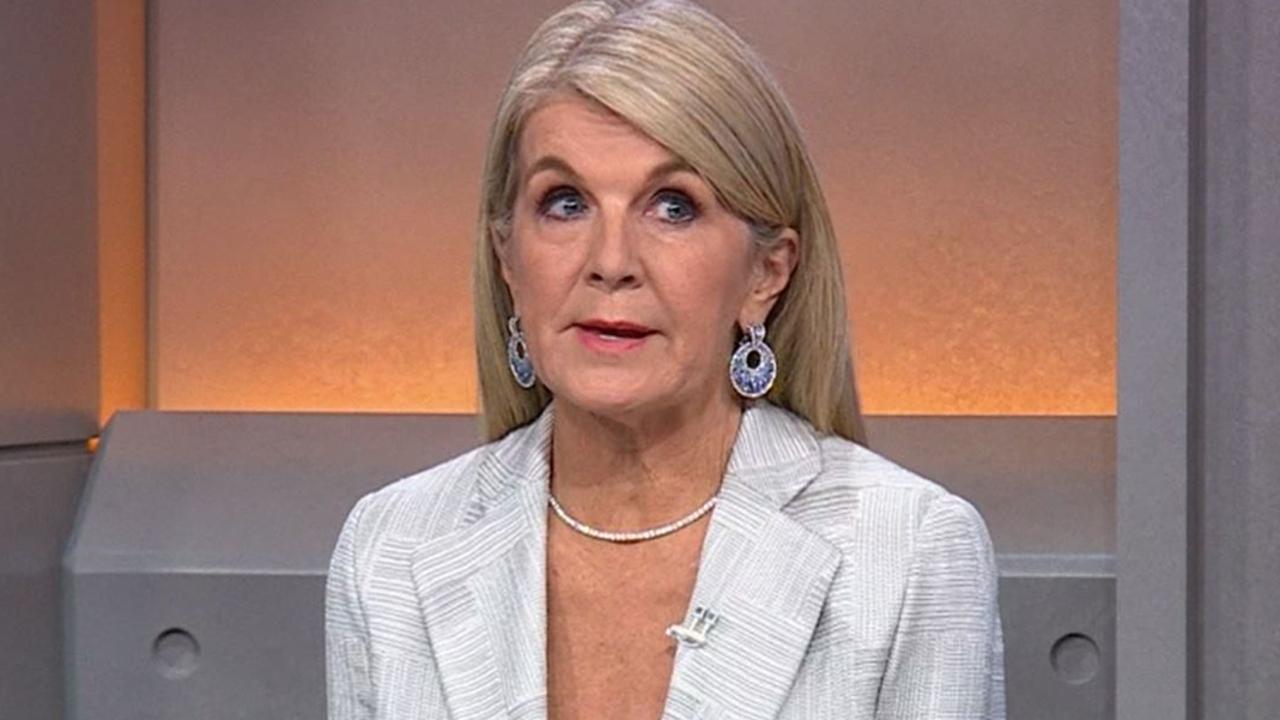 Julie Bishop stole yesterday’s election coverage and made it her mission to derail one star. James Weir summarizes.

Anthony Albanese may have won on Election Night, but Julie Bishop was the star of the show during television coverage, and the former Liberal Deputy Leader gleefully trolls the likes of Bill Shorten and Barnaby Joyce until they’re clearly annoyed.

Her obnoxious antics on the Channel 9 panel made it a must-see on all free channels, and competitors failed to add a famous commentator to their lineup that could offer Jay’s glitz, glamour, and sass. -Bish.

No doubt the Channel 9 executives patted themselves on the back for making her appear, even after the network’s leaders’ inept debate, which was trashed by viewers. Nine political editor Chris Ullmann cried for a week after we all cursed him. It’s good to see that last night he stopped his mascara before hitting the panel.

Julie made it clear early in the night that she was the main figure, and the seven panellists next to her were simply supporting the players. Except for Bill Shorten. He was an unofficial target there, whom she could openly mock.

It all started with the hosts briefly talking about Fowler’s whereabouts in western Sydney and what it looked like for Christina Keneally, who was launched into the electorate by Labor, to lose what was originally thought to be a safe win. And when host Peter Overton was about to leave, Julie decided to intervene.

“What would it mean to Labor, Bill, if the Fowler had such a turn against Christina Keneally?” she pretended to be thoughtful, looking at the leader of the opposition with feigned concern. “That sends a pretty strong negative signal to the local campaign, doesn’t it?”

Her sly tone made it clear that this was not a real question.

Bill scrunched up his face and looked at her like she just hit him on the back of the ankle for no reason.

Thank you for this understanding Juliehe muttered.

“You’ll be getting them all night, so get used to them.” She tilted her head with a smile.

And she was right. With her New Haircut Confidence, Julie treated this six-hour broadcast like it was an audition for her own TV show.

By the time Peter Overton crossed with Barnaby Joyce, she was at her best and decided to start bullying the Deputy Prime Minister as well.

It should be noted that Barnaby entered the live cross already fed up. Like he never No fed up – but last night he reached the end of his cable by 7 pm.

“Let’s get the National Party on now, we’re glad to have Barnaby Joyce on the line. Do we have you?” said co-host Alicia Loxley.

The footage shows Barnaby squinting at the camera.

Yes, Barnaby. This is national television. We can all see you.

It was like dealing with your dad who doesn’t quite know how to use FaceTime.

That’s when Julie had just started outright trolling him.

“Barnaby, you look kind of gloomy today,” she frowned mockingly.

Julie, come on, you know he has that face.

He released her with a roll of his eyes.

Then the rest of the group jumped up and started teasing him.

“Just one smile, Barnaby!” they all begged.

It threw him off track. He rolled his eyes, groaned, and then the living cross broke off.

On Channel 7, things were far from being so chaotic. But that doesn’t mean manufacturers haven’t tried. Clearly, the executives were ecstatic that they couldn’t pin J-Bish on their panel, so they joined forces and got the next best thing: Mikaelia Cash.

Apparently they were hoping that we would all be stupid enough to think it was Julie. After all, Michaelia Cash is without a doubt the Shelbyville version of Julie Bishop.

Seven’s political editor, Mark Riley, also tried to impress us with his charts, which were projected onto what was officially called the “Dream Screen.” For those of you who didn’t see it, the magic screen was literally just a computer monitor off Edwina Bartholomew’s living room desk. Sunrise production office.

It was a weak attempt by Seven to compete with Anthony Green’s jumbotron on ABC. So, Anthony is a great guy. But the producers should stop forcing him to use these new technologies. He would be more comfortable with a blackboard and chalk.

Watching Anthony Green use the touchscreen jumbotron was like watching your grandfather try to use an iPad by yelling at it.

“Oops, for the first time all night I pressed the wrong button,” he said, frantically poking at the screen.

After a few minutes, he began banging on the buggy jumbotron.

“Go away!” he shouted at the screen as different tabs opened.

Lee Sales sighed and kicked herself for not bringing one of her kids to teach her dad how to use an iPad.

Watching Anthony’s tech tantrum became so frustrating that we decided to change the channel and see what was happening on Ten.

Psycho. Absolutely no one switched to Channel 10. They had a panel of nobody. Why didn’t the producers ask Lisa Wilkinson to direct it?

She could spin all the plates flawlessly and single-handedly broadcast a six-hour live broadcast. And if the executives really wanted another co-host involved, they could just have Tommy Little sit right next to her and drop in jokes about dicks from time to time.

This is an afterthought for you.

Back on Nine, it’s time for them to pull out their other secret weapon: a ukulele-playing hologram robot, which was then used to smash the computer animations of politicians’ heads during April sun in Cuba played.

It was a creative idea, but in reality it was supposed to be a cartoon bulldozer that would roll over the faces of politicians. More current and up to date.

In any case, this whole passage must have touched Karl Stefanovich. He reportedly begged his bosses to take part in the election night coverage, and they literally preferred the idea of ​​using a computer-generated robot.

While all of this was going on, Julie continued to taunt Bill Shorten with sly remarks that she disguised as helpful remarks. At one point, she even began to punctuate her sarcastic remarks with the hashtag “#JustSayin”.

“Look, the test is this: if we’re liberal, we’re stuffed,” Bill commented on Griffith’s seat in Brisbane.

When Albo’s victory was announced, the rest of the group congratulated Bill on the success of his party. But Julie? It’s time to troll again.

“Bill, I have a text message – I have to share it with you. This is breaking news: Chloe wants to know what you’re getting her for her birthday tomorrow,” she said, before demanding that Bill tell him what his wife would get. “I want you to announce it on national television!”

Bill tried to drown out her derisive exclamations.

The TV crews lined up outside Kirribilli’s house, waiting for Sco to leave and head into town to address the nation.

It was raining on Sydney’s lower north shore, and as the prime minister’s sedan raced over the Harbor Bridge, a guy on a scooter chased him on Channel 9, and live footage from a VespaCam was broadcast into the studio. But the scooter driver was so distracted, trying not to crash, that for most of the trip the camera was filming just blurry bitumen:

The BMW then whistled down a concrete ramp into an underground car park and nearly killed Channel 9 reporter Fiona Willan, who practically had to roll to safety and then jump to her feet to do an impromptu live crossover for VespaCam:

At the hotel, as SkoMo took the stage with Jenny and the girls, there was one big question: would Jenny show her fingers?

Just weeks after her husband showed up with his thumb bandaged and tried to evade telling Aussies how he cut off his appendage, Jenny appeared in the photo on Thursday with a band-aid on her finger.

How did she cut? And what the hell is going on in the Morrison house with the knives? She knew that was the answer we all yearn to know.

In an attempt to avoid a media scene that would overshadow her husband’s modest moment, she chose to hide the injury with two-meter sleeves.

Her ploy worked and SkoMo was able to deliver his speech.

“Three years ago I stood before you and said: I believe in miracles,” he started.

And just like three years ago, we cowered in anticipation that the assembled mob of hyper-enthusiastic liberals would provoke a group call and response and yell back, “Where are you from? You are sexy!

After he left the stage, the cameras had nothing to film, so they just started following former Prime Minister John Howard, who seemed lost and was trying to find a free RSL van to get back to the nursing home.

We were left to wait for the last thing: Albo’s speech. He took the stage at Canterbury-Hurlstone Park RSL and burst into tears as the reality of the big event hit. His supporters applauded even louder. Then he climbed them.

— Can we dial it more quietly? he warned.

Albo furrowed his brows and raised his voice.

“No! No! No! Down! Down!” he scolded his supporters as if they were Toto jumping on his new bed at Kirribilli House.

“Can you clean up the mess, please?! … I intend to run an orderly government, and that starts here. So behave!”

Well then. Looks like it’s going to be a fun three years.