Women are often stereotyped as more “irrational” and “emotional” than men. Yet the study Which concludes, such labels are only disproportionately reserved for women. Not only do these labels become obstacles when trying to understand and identify emotional maturity in all adults, but they can also lead to unprofessional and even problematic workplace behaviors. .

The narrative that men are “rational” while women are merely ’emotional creatures’ incapable of restraint’ was tested in a recent post. AITA subreddit. Original Poster (OP) u/imonvacaaation Wanted to know if her decision to turn the tables on her male co-worker by using a label often attributed to women was justified…

A woman starts calling her male co-worker’s aggressive outbursts “emotional” and forces fellow co-workers to do the same.

The post opens with the OP telling readers that she is an engineer, on a team of seven others, trying to navigate the abusive behavior of a male teammate. She describes him as someone who is unable to respectfully disagree, who raises his voice, yells, and doesn’t respect personal space: behavior that the OP hates. She continues by describing the indifference her boss displayed when he brought up this co-worker’s disturbing behavior.

The boss responded to her concerns by brushing aside the situation and said that her attitude is better now than it was a decade ago. It made the OP wonder what he was like 10 years ago, given that his current behavior is far from “pleasant”. 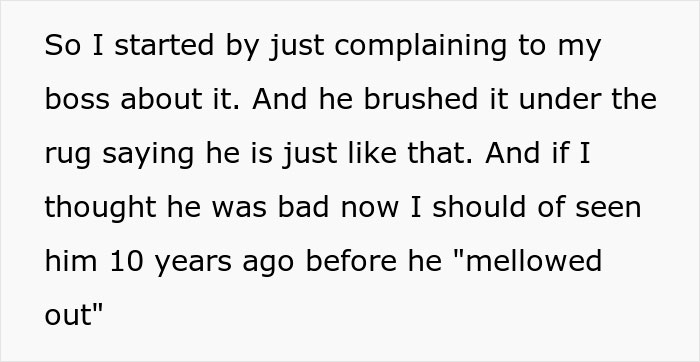 The woman tried to inform her supervisor about her coworker’s unprofessional behavior, but it was “swept under the rug.”

So, with no hope of intervention from upper management on the horizon, the OP opted for an alternative course of action. Instead of commenting on the aggressive coworker’s behavior and labeling it as “anger” or “argument” and “yelling,” she flipped the script. He began changing words and phrases such as “sentimental” or “sarcastic”, hoping that this would change the office’s perception of him from being “overbearing” to being “sentimental”.

The OP took matters into her own hands and started making comments about the situation to her co-workers. 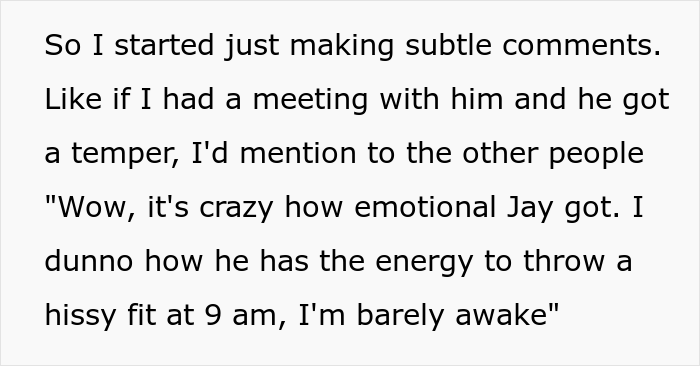 As the OP describes, she began to subtly drop her curated comments in meetings with co-workers and her boss. If she met him and he showed his anger, she would mention him to others with disapproving comments on his overly “emotional” behavior, not even realizing that he had a “husky”. How was the energy to throw a fit. 9 o’clock in the morning.

If a co-worker asked her why he was yelling, she would be at a loss for words and comment on how unreasonable he was being. If the OP were to meet with her boss, she would start by praising her other male co-workers and then mention how the annoying co-worker had trouble “managing her emotions.” Lying down and reminiscing about “how he was” was a “fury of rage”. 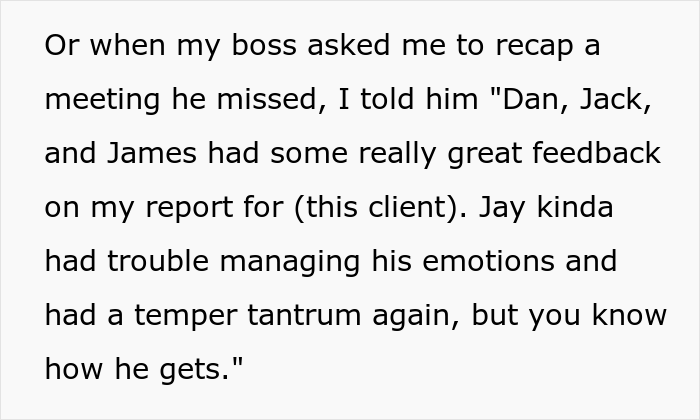 This shift in language was adopted by others in his workplace, and they called this difficult behavior “Jay’s Fits”. The OP added that she started commenting on his “emotional” behavior to his face, telling him that she didn’t understand him when he was being so emotional.

So, how did the troubled coworker adjust to OP’s change of tactics, which was becoming an office trend? She goes on to say that co-workers start taking action and telling her to get a hold of herself. Over time, the troubled co-worker stopped yelling at the OP.

The change in language started to catch the attention of OP’s other co-workers.

Others in the OP’s office then called the troubled coworker “irrational” and “emotional.”

This strategy seems to be working for the OP. His current interaction with his co-worker looks a little different than the previous ones. The OP talks about a recent conversation where “J” fell back into his old ways and she told him she couldn’t talk to him when he was getting too “emotional”.

However, this response from the OP caused “J” to become extremely aggressive and ask why he labeled her “emotional.” The OP simply replied “Dude, you think you’re on the verge of tears, look in the mirror before you ask me.” He also remarked that he looked like he was about to cry, knowing that the co-worker would get even more upset, but he was fully aware that his red face was filled with anger, not anger.

OP still uses this method whenever she is confronted with her coworker’s behavior. 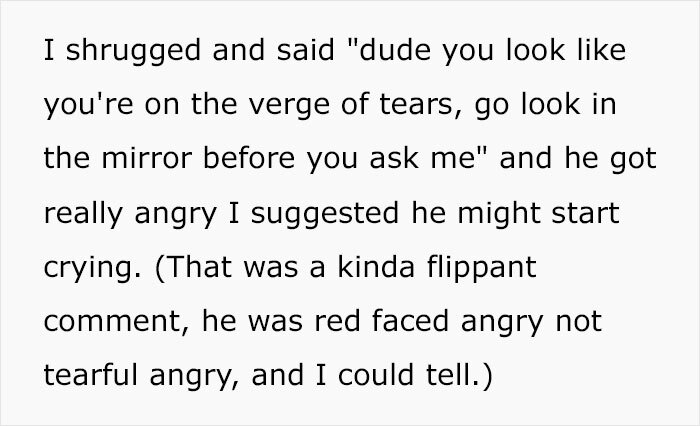 The OP reflected on her strategies and understood how it may seem “small”, but still feels that it has been effective. 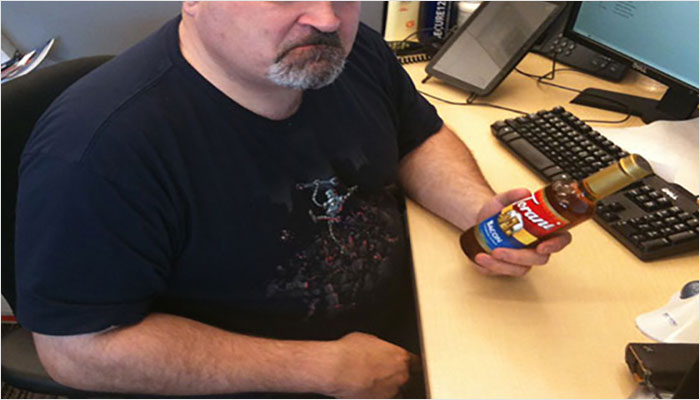 Image credit: I am R (not the original picture)

The OP feels that maybe she was on the verge of gaslighting the co-worker, but also feels that it was the best course of action because “…it worked when the ‘proper channels’ didn’t.”

So, the question remains: Did OPTA call his co-worker emotional when he was mad? Well, Pandas, let us know what you think and leave your comments below!

In the comments, people told the lady that she did everything right and praised her for flipping the script!