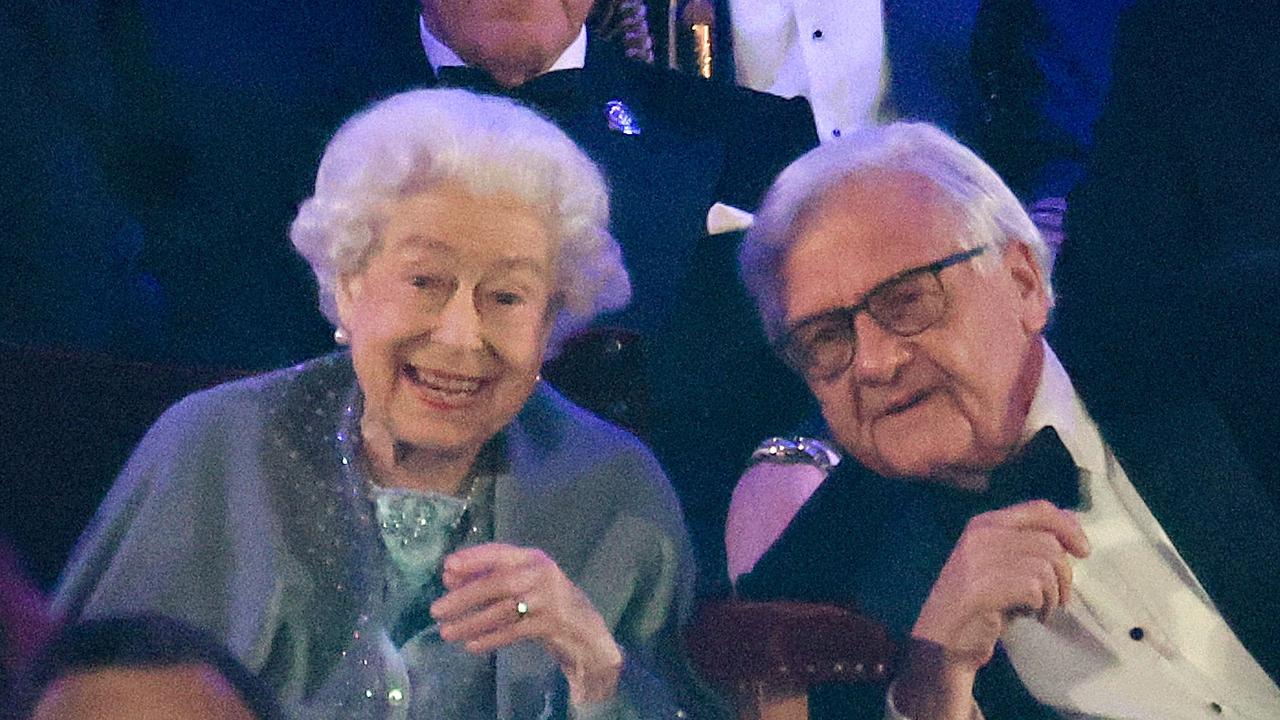 A few days after she was too ill to attend the opening of Parliament, the Queen stepped out and photographs exposed her “cunning” plan.

And… she’s back! Smile! Pink sponge! Basically superglue on pearls! Her Majesty the Queen, after mysterious mobility issues, wheelchair applications, eleventh hour cancellations, mysterious applications and heart murmurs, IS BACK!

On Friday (UK time) she made a surprise appearance at the Royal Windsor Horse Show showing positive glee, laughing, chatting and looking much more cheerful than ever.

Then, early Monday morning, the 96-year-old arrived for the final evening of Galloping Through History, an equestrian extravaganza hosted by The Show Starring Helen Mirren and Tom Cruise, beaming with positivity.

Dressed in a pale blue embroidered dress and gray cape, she received applause from the crowd as she walked to her seat. Again, she looked thrilled to have gotten out of her draft and spent the night.

Image editors and photo agencies around the world must be confused right now: The world hasn’t seen such a preponderance of photos of the Queen looking so joyful and cheerful in years.

Since this is all taking place just days after everything looked so terrible, it wouldn’t be a surprise if Prince Charles cleared his schedule to dedicate the morning to rehearsing the wearing of the Imperial State’s crown.

Last week, it was announced that for the first time in nearly 60 years, the Queen would not be attending the opening of state parliament for health reasons, formally instructing Charles to read her speech and Prince William to be assisted by his father. (This is a royal game, isn’t it?)

Both men looked so grim that the royal watchers were clutching their pearls (that’s the shape you see) with the general impression that things must be really, really bad at Windsor Castle.

Yet fast forward a few days after the state opened, and there the Queen looked as fine as rain and pleased as punch, beaming positively as she chatted for quite some time with retired racehorse trainer Henrietta Knight, and later joked with Colin Brooks, Chairman exhibition committee.

(It is believed that, unlike the State Opening, she has not missed a Royal Windsor Horse Show in 79 years.)

So we’re looking at the royal Lazarus? Have scientists at Oxford University come up with some new miracle cure to cheer up Her Majesty’s gait? Or was there something much more mean and cunning?

There is not the slightest doubt that King Charles III will be a less than popular sovereign when he finally takes the throne. Take it for granted that the extensive commemorative collection of coronation china produced by the Royal Collection Trust will at some point in the future gather dust on the shelves along with a series of items they produced to commemorate Princess Eugenie’s 2018 wedding to the tequila ambassador. Jack Brooksbank (true).

A poll last week showed that only 36 percent of Britons think Charles will make a good king, as opposed to 80 percent who think the queen has done a brilliant job.

Given all this, what should a troubled monarch and mother do?

This weekend, Time published a rather unusual report that raises the possibility that the Queen may have summoned the sick woman to the State Opening of Parliament to give her rookie royal son a chance and try to get the public accustomed to the idea of ​​Charles at the head.

Headlined “The Queen Used to Resist Succession—Now She Has a Master Plan,” the article reported that “Prince Charles’s replacement appearance at the Queen’s speech was part of an elaborate dance choreographed by the monarch herself.”

“Tuesday’s events were planned by the Queen, Charles and their aides to ‘soften the transition’ ahead of the Charles feature film currently in production.” Time‘ royal editor Roya Nikha wrote.

“Make no mistake, it was a trailer,” a senior royal source told Nikkhah of Charles’ lineup at the state opening.

“The prince was dressed very regally, but not to such an extent as to appropriate the sovereign. Once you set your eyes on it, things won’t be all that different when we see him in the crown. Technically, he didn’t even have to read the speech.”

If so, then the color impressed me. Who knew Her Majesty had such proto-Machiavellian tendencies?

Supporting this planned theory is that on the two previous occasions when the Queen missed the state opening (during her pregnancy with Prince Andrew and Prince Edward), the Lord Chancellor read her speeches.

Considering how traditional the entire royal show is about tradition, it wouldn’t be the slightest bit of a surprise if she insisted on shaping up on that front. However, according to Time“A source close to the monarch confirms that she was adamant that Charles, and not Dominic Raab, the Lord Chancellor, should give the speech.”

“Forcing her heir to read this was a very conscious decision of hers. To such an extent, it plays to cement in the minds of people that his role is approaching, no doubt, ”said the same senior royal source. “Blink and you won’t see the difference between Tuesday and the first time he gives a speech like a king.”

If the cunning queen really planned for Charles to replace her, even if she could potentially be physically ready for it, then glory. It was a smart and necessary move.

When Her Majesty, years later, we hope, jumps out to join the great race gathered in the sky, the psychic impact on the British and those of us who live in the Commonwealth will be devastating. For the 64 million people in the UK, she is the only sovereign they have ever known. (About 3.2 million people over the age of 80 can remember something of the reign of her father, King George VI.) More than any other monarch in British history, she embodies the certainty and continuity that is a constant part of the political landscape.

Not only losing that, but having her place then taken by her homeopathy-loving hedgerow enthusiast and tampon-loving son, will make the roll from one reign to the next all the more abrupt and painful.

Then broader cultural shifts come into play. The monarchy might have been able to survive on continued support and respect for the High Lady (as Diana, Princess of Wales called her mother-in-law), but that would evaporate once her death was announced.

For proof, look at 12-year-old Johnny from Coventry, who this week told once: “All the royals do is be born. It’s just not very fair.”

Similarly, Sean, 16, from Warwick, who told the paper he thought the royal family was “delayed”.

A poll earlier this month found that 60% of Britons are still in favor of retaining the institution of the monarchy, up from more than 75% a decade ago. (Currently, 27% want it all abolished, up 2%.)

Against this backdrop, any steps the Queen and Charles can take right now to try and smooth the path for him would make sense.

Because while Her Majesty’s peppy and jubilant performance at the Windsor Horse Show may have been nice to watch, her advancing years are clearly catching up with her. The cane is now an integral part of her image, because only two years ago she could ride her Fell ponies. When she arrived at the Royal Windsor Horse Show last week, she used a small elevator to go up to the platform where she was stationed. There has also been speculation that she may be suffering from some kind of heart condition (of course, unconfirmed).

The royal family is undoubtedly looking down on what will be a tectonic push when the sad day inevitably arrives and she passes away. What happens next, and whether they can survive this once-in-a-century riot, is by no means guaranteed, especially when the Johnny and Sean generation unfortunately comes of age just as Charles takes over.

Fortunately, there is one thing that Her Majesty has not faded in the least, despite her age: a dry sense of humor.

During Monday’s introduction of the Horse Show, broadcaster Alan Titchmarsh took the stage and told the crowd, “For 70 years there has been one constant beating of the heart of this nation, and that heart belongs to Her Majesty the Queen” to rapturous applause and applause. Immediately, the cameras switched to the woman in question, who looked evasive at first, then shrugged and nodded, offering the funniest two seconds of regal performance in living memory. Social media picked up on this moment almost immediately.

Even at 96, she was and always will be the face of a thousand GIFs.