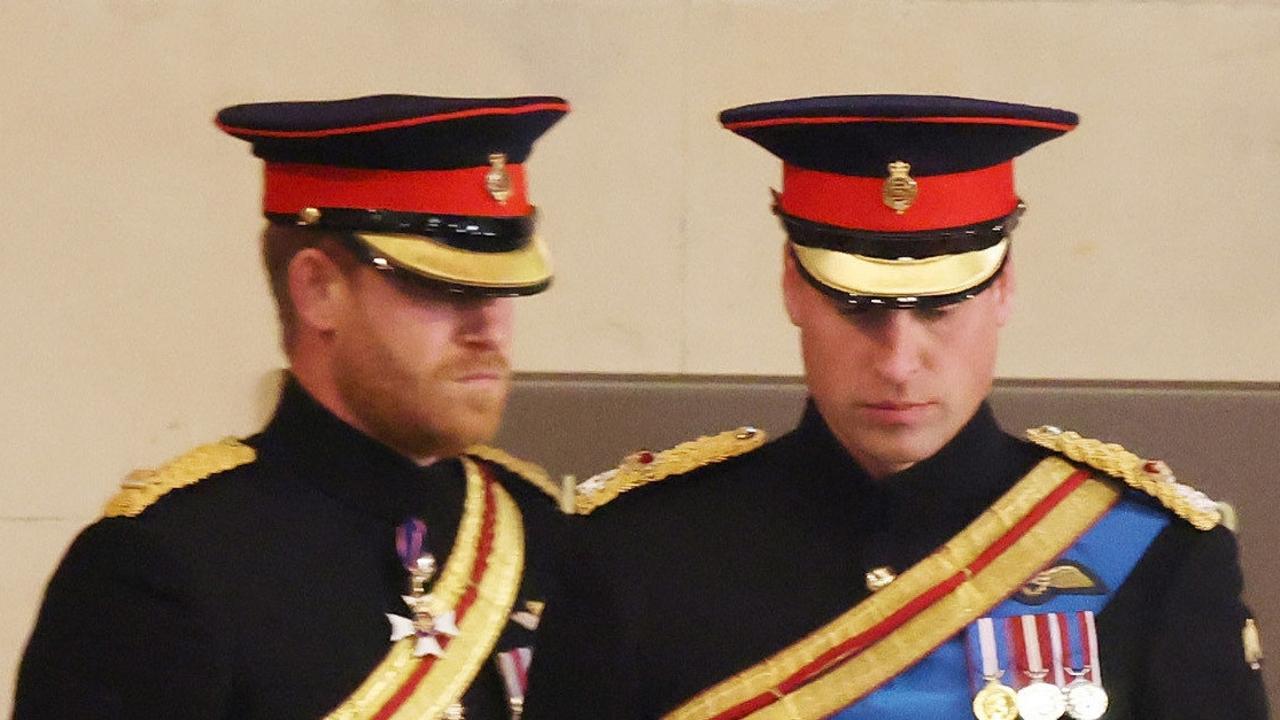 Princes William and Harry came together last night to demonstrate a united front for a historic vigil at the Queen’s casket.

The brothers put their differences aside to lead all eight of Her Majesty’s grandchildren in a ceremony at Westminster Hall. informed Sun.

Earlier, William had joined the king to meet some of those who were in line for lying in state by the Thames.

Last night, the Queen’s dear grandchildren stood side by side in homage to their beloved “grandmother”.

Brothers William, 40, and Harry, 38, reunited in grief – and together in uniform – as they stood at the casket at Westminster Hall.

Princesses Beatrice and Eugenie previously paid tribute by thanking the queen for making them laugh and picking heather and raspberries.

They added touchingly, “We were honored to be your granddaughters.”

Yesterday’s nightly vigil was the first time that the grandchildren of a monarch carried the ceremonial mark of respect.

William and Harry led the eight, lining up just before 6:00 pm.

As they were being given instructions in the archway, Harry could be heard saying something over William’s shoulder, who seemed to say yes.

After two blows of the guards staff on the stone floor, all eight then descended the stairs of the Grand Committee – to the surprise of well-wishers who had queued for hours to look at the coffin.

Sophie, Countess of Wessex, appeared in tears as she watched from the balcony with Prince Edward.

Harry walked behind William so the formation could break, Wills at the head of the coffin and Harry at the back.

Prince Andrew’s daughters Eugene, 32, and Beatrice, 34, walked side by side in front of the young Wessex ladies Louise Windsor, 18, and James, Viscount Severn, 14.

Princess Anne’s children Peter Phillips, 44, and Zara Tindall, 41, were in the back.

The grandchildren stopped when they reached the floor of the hall facing the coffin, and after three blows the guards moved forward in formation, taking their places at 18:03.

At 6:15 pm, the public mourners stopped and eight people returned to the stairs.

This time Harry was at the back, but the formation was based on where they stood at the coffin.

As they climbed the stairs again, Zara’s right shoe fell off.

She smiled at Louise before removing her heel.

A few minutes later, William made his way to a waiting car. Harry joined hands with Zara and they followed him.

Peter Phillips returned to his car with Louise and Beatrice.

In a statement released minutes before the vigil, Eugenia and Beatrice wrote: “We cannot express in words since you have left us all.

“There were tears and laughter, silence and chatter, hugs and loneliness, as well as a total loss for you, our beloved queen, our beloved grandmother. We, like many, thought that you would stay here forever. And we all miss you terribly.

“For the moment, dear grandmother, all we want to say is thank you. Thank you for making us laugh, for turning us on, for picking heather and raspberries, for marching soldiers, for our teas, for consolation, for joy.”

The statement added: “Goodbye, dear grandmother. We were honored to be your granddaughters and we are very proud of you.”

The brothers were last seen together in uniform at the Cenotaph on Memorial Day 2019.

James wore commemorative medals designed for the jubilee and presented to him by the Queen.

Sources close to the royal family said the grandchildren were invited by King Charles III last night to their own vigil.

They were eager to pay their respects just like their parents, with such poise and honor on Friday night.

John Saddes, 48, stood in line as the young members of the royal family arrived.

He said: “It was incredible. Seeing them all there like that, in uniform, was just unreal.”

She said: “Harry and William looked overwhelmed, completely stunned. It was completely quiet. Harry deserved to wear his uniform. The Queen would approve.”

This article was originally published on The Sun and reproduced here with permission.