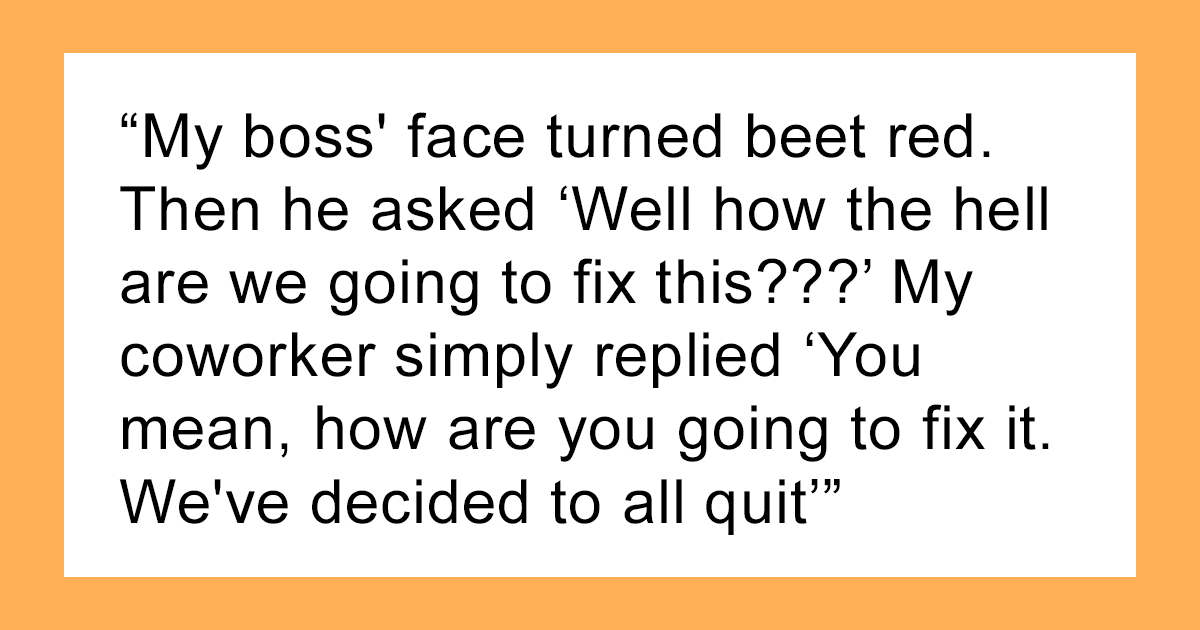 We understand art is not for everyone. People shouldn’t get art, that’s fine.

But what they really need to understand is that art is a necessity in people’s lives, whether on an individual level or on a more global level that manifests itself in societies and cultures.

Art, like Rome, is not “built in one day”, it must be born, develop, move from mind to body, i.e. into the canvas, which means that you have to deal with all the mundane factors, such as rain.

But all this can be destroyed in the blink of an eye if it is turned into a poorly managed and completely incomprehensible business tactic.

Painting on a tiny canvas is hard enough, but painting on a 5-story building is a lot harder, and even harder when the boss gets involved.

So just over a week ago, this redditorwho posed as a muralist, shared a story on the r/MaliciousCompliance subreddit, detailing how their company went through a management change and how things went downhill because of how hard the new guy tried to streamline the business.

The story goes that at that time OP had been working for a painting company for 3 years. The boss that they had up to this point was good, knew his business better than anyone, and was generous, and therefore not only helped, but also understood all the nuances associated with the work.

One Redditor shared a malicious compliance story, explaining how a management change ruined the company, all because the boss was too business-oriented. 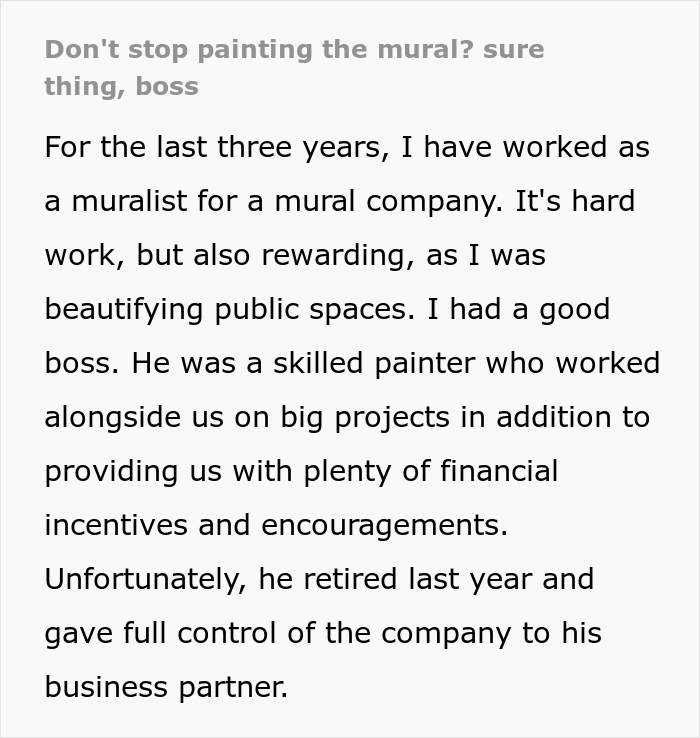 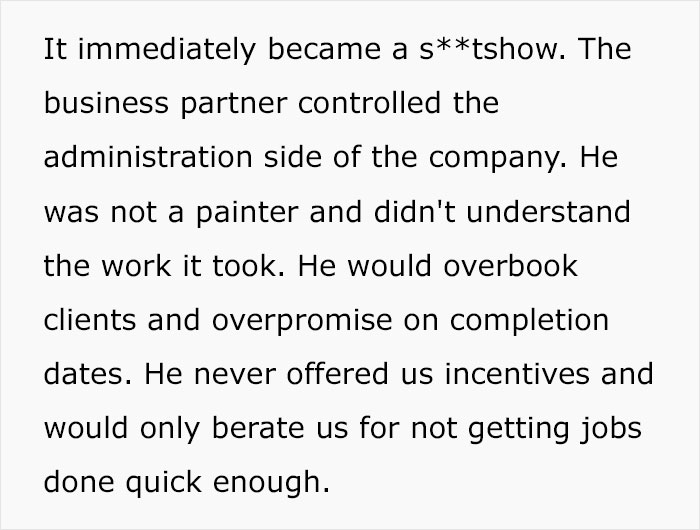 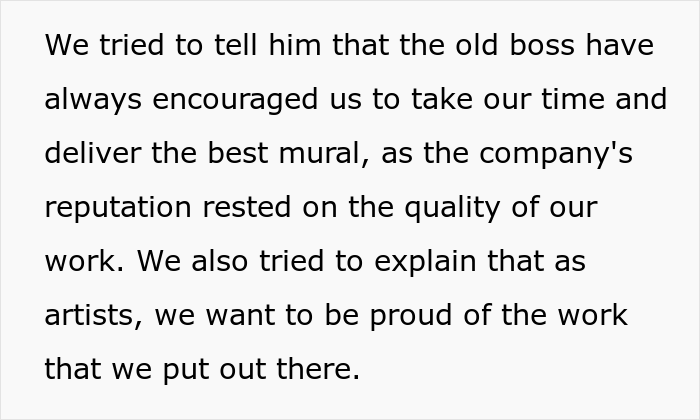 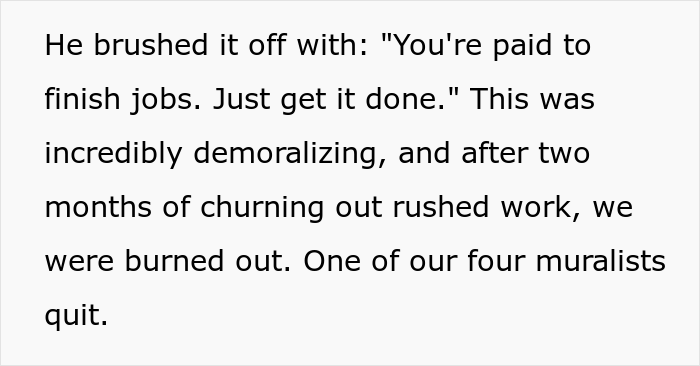 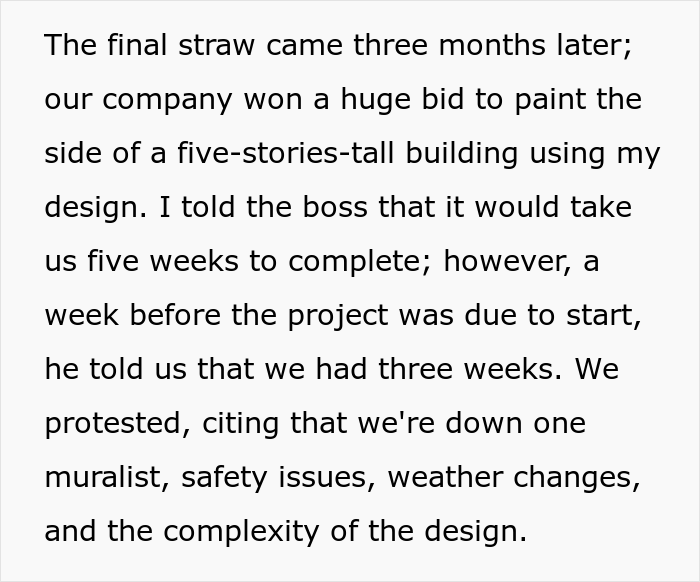 But the boss decided to retire and thus decided to hand over the enterprise to a business partner. Now the business partner had a completely different approach to things – one where everything had to be done as quickly as possible at minimal cost and people would have to deal with the attitude of the boss. Taken to the extreme.

So much so that one of the four muralists left before this huge project, which was the final nail in the coffin.

The team was given the task of painting a mural on a five-story building – an incredible feat in itself, but given the “businesslike” approach to it all, tensions began to build even before it all began. 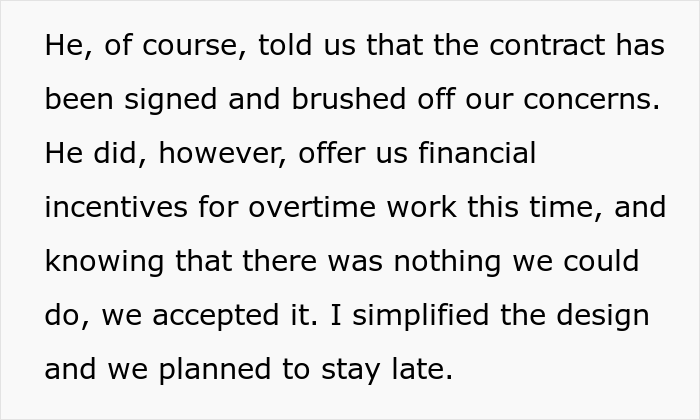 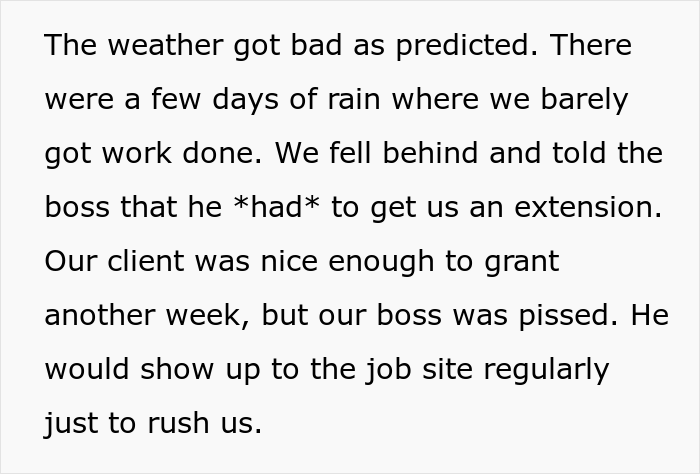 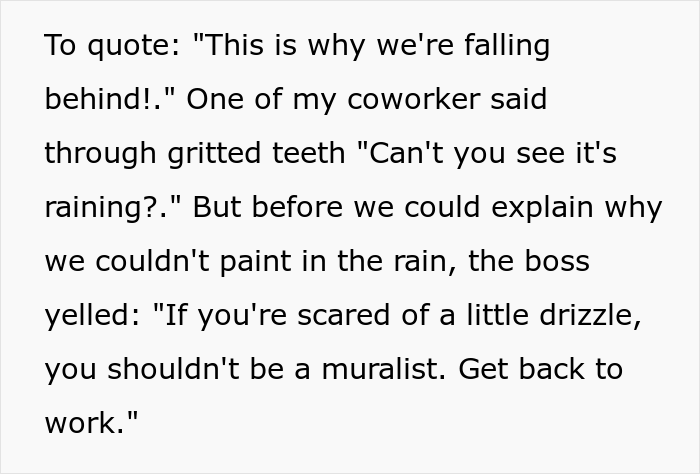 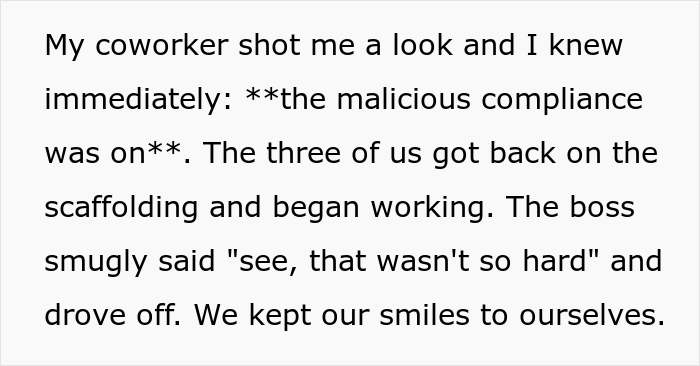 Despite the team’s estimates and demands, they – surprise, surprise – had to finish the project in three weeks instead of five, which meant they had to simplify the design itself. And this is in addition to working at a regular salary with an overtime bonus (whereas under the previous management there were more of them), and everyone was already understaffed and demoralized from the last project. Things weren’t going very well.

The reversal occurred when they had already partially completed the project, and the rainy days arrived. If you don’t know, you can’t paint the mural in the rain because the paint will immediately run off and ruin the mural, so the team will have to work on it. 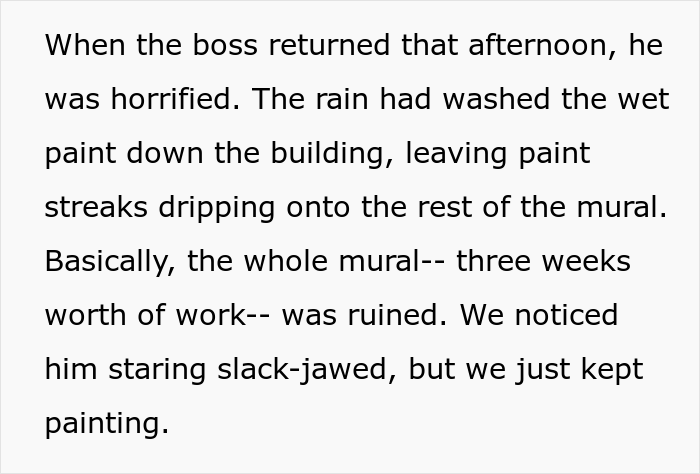 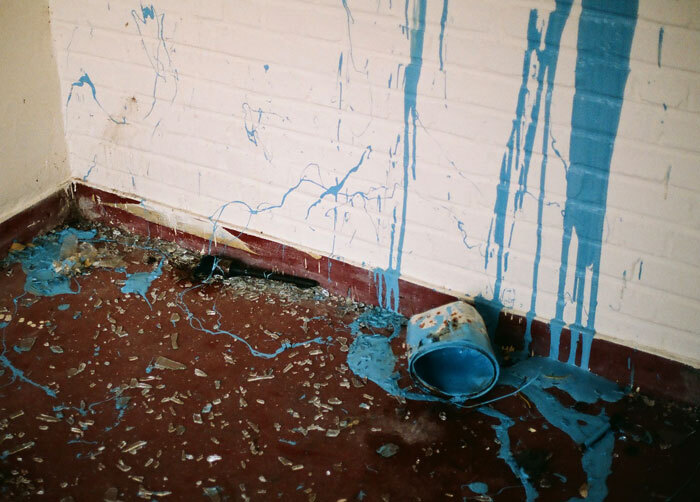 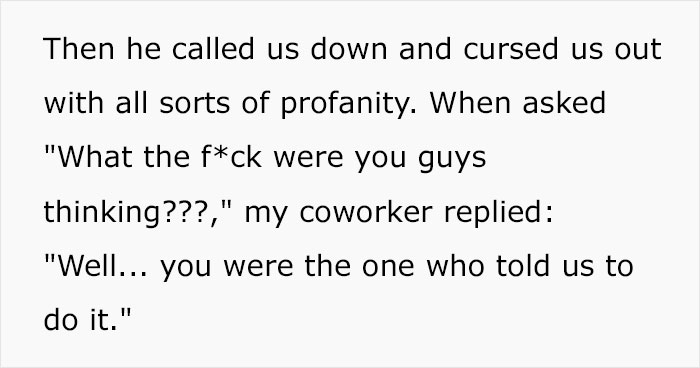 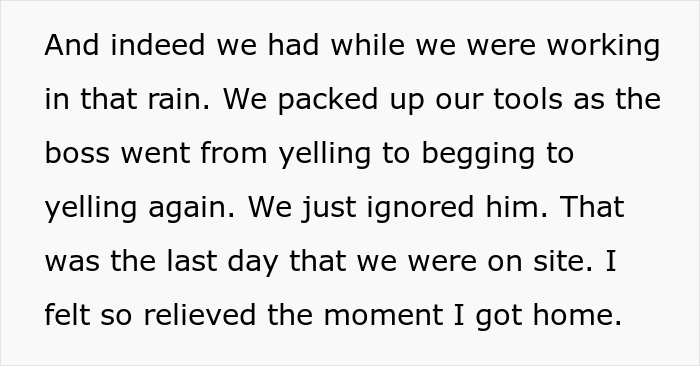 Well, such a rainy period has come, and the muralists were sitting in the car, trying to wait it out. The boss also started visiting the facilities regularly to check on how things were going (another thorn in the team’s side) and, of course, he wasn’t all that happy to see his team “goofing around”.

Immediately followed by a demand to return to work: “If you are afraid of a light drizzle, you should not be a muralist. Get back to work.” Yes… that’s right… A signal of malicious submission.

The team began to smile and thought to themselves, “Come on, let’s get back to work.” And so they did. During the rain. Despite this, a 100% failure of three weeks of work. So it was. Oh so nice.

The OP also gave a brief explanation of how things went after everyone left on the spot. 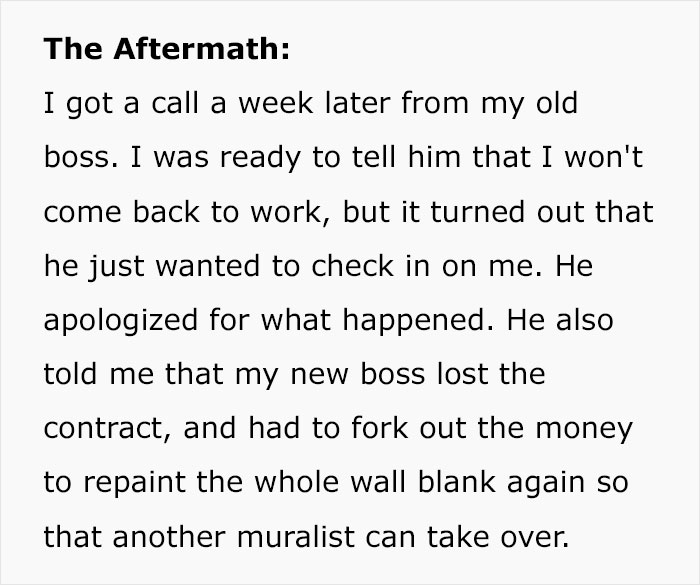 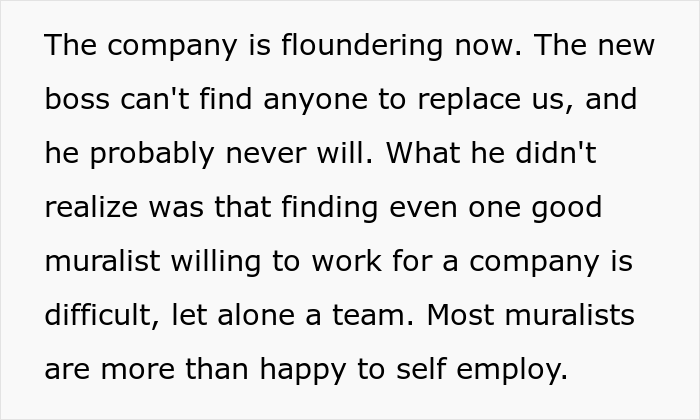 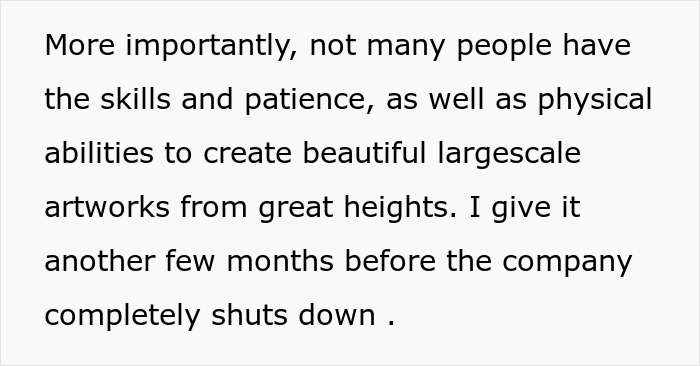 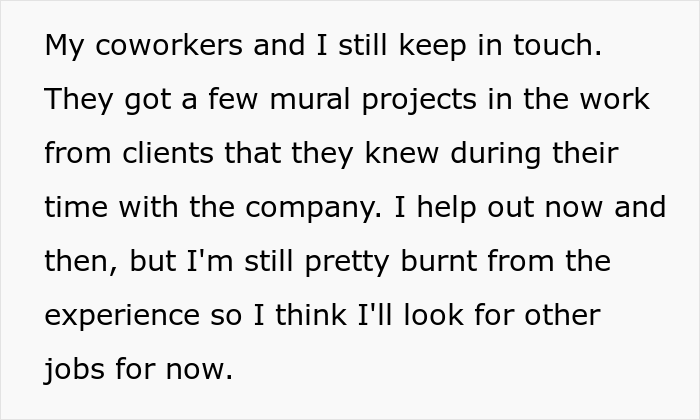 The boss comes back after a while only to go crazy. While they were still painting, he called them downstairs, started cursing them the hell out, to the point where you would expect to hear profanity you’ve never heard before.

“What the [frick] did you guys think??? the boss exclaimed. “Well… it was you who told us to do this,” one of the muralists explained. Disappointment rises. “Well, how the hell we are you going to fix it???” the boss continued. “You mean how you going to fix it. We decided to drop everything.” Microphone drop.

The boss kept begging them to stay and finish the mural as they packed up and left the site.

We will let you read effects itself, but in a nutshell the company lost the project and continued to decline. The OP gave him a couple of months until he completely shut down.

Needless to say, people on the internet loved this story because it’s a textbook definition of how to fail in business. 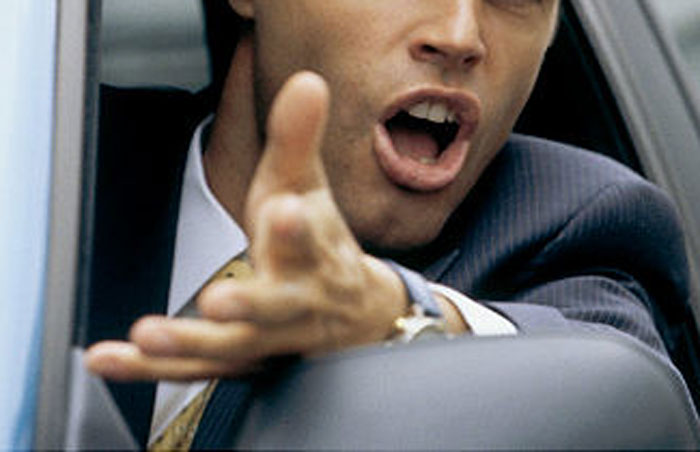 The Reddit community has applauded the OP and their team for pushing back, and more than that for very malicious compliance. Some commented that stories like this happen all too often and bosses don’t seem to learn anything and share their stories to prove it.

Others expressed sympathy, expressing their understanding of the nuances of the muralist and painter profession and that most people don’t really understand how much hard work it takes to make it all happen.

The post received a modest 4,800 votes, several hundred comments, and several Reddit awards. And speaking of the post, you can check it out in its entirety. hereas well as all comments from respondents, or you can also check out all of the other malicious compliance stories we’ve reviewed in the past.

Or not, because we’d love to hear your thoughts and stories in the comments section below.